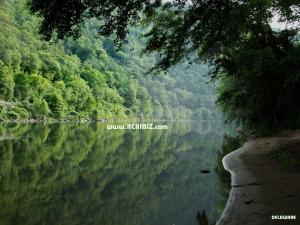 Delaware, one of the United States located on the Atlantic coast in the Mid Atlantic region of the US. Delaware is a mere 1,954 square miles (5,060 km2) and it is statistically the second-smallest state in the United States. Delaware is bounded by Pennsylvania, the Delaware River Delaware Bay, New Jersey and the Atlantic Ocean; and Maryland.
There are two major physical features in the state of Delaware: the Piedmont Plateau and the Atlantic Coastal Plain. Delaware’s average elevation is 58 feet above sea level, with only a few areas of high ground; much of the state lies on the Atlantic Coastal Plain, a flat region that covers most of the U.S. eastern seaboard. Despite its small size and flat horizon, Delaware has a range of land features.
Delaware was one of the 13 colonies participating in the American Revolution. On December 7, 1787, Delaware became the first state to ratify the Constitution of the United States and has since been known as “The First State”.
The state of Delaware is divided into 3 counties, namely, New Castle, Kent and Sussex. Before settlement by Europeans around the 16th century, Delaware was inhabited by several groups of Native American Indians.
Diamond State – Legend has it that Thomas Jefferson called Delaware a “jewel” among the states because of its strategic location along the East Coast. Blue Hen State – One form of entertainment during the Revolutionary War for Delaware soldiers was cock fighting.
Delaware shares a semi-circular border with Pennsylvania. Delaware is home to Dover International Speedway, also known as the “Monster Mile,” which hosts two NASCAR races each year.

Voted the best place to live in Delaware for very good reasons; quality of schools, nightlife, and job opportunities all surpass other neighbourhoods in the state. North Star provides residents with great commuting options. Unsurprisingly, 98% of residents in North Star live in owned homes.
While the nation’s infrastructure earned a “D+” in the 2017 Infrastructure Report Card, Delaware faces infrastructure challenges of its own. Success in a 21st century economy requires serious, sustained leadership on infrastructure investment at all levels of government. Delaying these investments only escalates the cost and risks of an aging infrastructure system

Delaware’s agricultural output consists of poultry, nursery stock, soybeans, dairy products and corn. Its industrial outputs include chemical products, processed foods, paper products, and rubber and plastic products. Delaware’s economy generally outperforms the national economy of the United States.
Delaware is also an important agricultural state because it is close to the large eastern United States markets. The state has good transportation facilities. It is connected to neighbouring states canals, highways, and railroads. Due to the favourable climate, fruits and vegetables are grown in abundance. And agro processing plants, poultry production and produce are leading cash products for the state of Delaware.
Wilmington, a manufacturing hub, is the largest, with two-thirds of the Delaware’s population residing there. The last estimated population of Delaware is just over 920,000. Wilmington is an important seaport because of plentiful waterpower and easy access to the Delaware waterway. This is Delaware’s main financial, commercial and banking zone.

The United States financial system is a network that facilitates exchanges between lenders and borrowers. The system, which includes banks and investment firms, is the base for all economic activity in the nation. According to the Federal Reserve, financial regulation has two main intended purposes: to ensure the safety and soundness of the financial system and to provide and enforce rules that aim to protect consumers. The regulatory framework varies across industries, with different regulations applying to different financial services.
Individual federal and state entities have different and sometimes overlapping responsibilities within the regulatory system. For example, individual states and three federal agencies—the Federal Reserve, the Office of Comptroller of the Currency (OCC), and the Federal Deposit Insurance Corporation (FDIC)—regulate commercial banks. Other sectors of the financial market are regulated by specific entities.
Several major banks were already incorporated in Delaware because of the state’s Chancery Court, where corporate cases are heard by judges, not juries, and resolved faster. The Chancery Court has long made the state an appealing place for businesses to incorporate for legal benefits.

Although some States in the USA offer offshore financial services e.g. Delaware, the United States is not considered to be an Offshore Financial Centre. The USA is not on the FATF List of Countries that have been identified as having strategic AML deficiencies

​The last Mutual Evaluation Report relating to the implementation of anti-money laundering and counter-terrorist financing standards in the USA was undertaken by the Financial Action Task Force (FATF) in 2016. According to that Evaluation, the USA was deemed Compliant for 9 and Largely Compliant for 21 of the FATF 40 Recommendations.

Delaware is considered an attractive state of America for an offshore company in Delaware for tax optimisation and international business structure.
Delaware became the first state in the nation to ban by statute the sale of bearer shares, which are unregistered shares that only require the transfer of a physical document and therefore lack the regulatory oversight of common shares. Shares without par value can be issued.
A corporation needs at least one director and one shareholder. However, corporate directors are not permitted. There are no residency requirements, however, the corporation’s registered office and registered agent must be situated in Delaware.

There is no sales tax in Delaware. Additionally, there is no state corporate income tax on goods and services provided by Delaware corporations operating outside of Delaware. The state does not have a corporate tax on interest or other investment income that a Delaware holding company earns. An offshore company doing business through a subsidiary in the U.S. must register that company under state law. In addition, Internal Revenue Service rules require the registration of foreign financial institutions that have U.S. account holders or substantial American ownership. It’s very popular to take advantage of a stable jurisdiction with very good reputation.

What is Delaware loophole?

The Delaware loophole is a longstanding, legal practice that large corporations in Pennsylvania use to exploit a state law that allows them to establish holding companies in Delaware.

The Delaware Limited Liability Company (LLC) is a legitimate US limited liability company internationally recognized and accepted. Investors who desire a US company with which to trade and or invest have the option of choosing a US company that has the advantage of being tax-free.
Though the Delaware Limited Liability Company is not an offshore company, when the Delaware Company is formed and incorporated by a non-US nationals and the business of the offshore LLC is wholly offshore, that is to say, conducted outside the United States, any income generated from such business activities under the LLC is tax free under US systems. As such, it is sometimes called the “Delaware offshore company” or “Delaware Company for non-residents”.
An LLC is not limited by shares and as such does not have any shareholders, the members of an LLC are called members. The LLC is a legitimate entity that is treated separately from the members. Because shares are not issued by LLCs there is no authorized capital requirement.
In a Delaware LLC, the assets of the beneficial owners is carefully protected, and the company is subject to “pass-through” or “flow through” taxation which means the LLC does not pay corporation tax; members are responsible for personal income the on profits distributed.
One or more members or organizers can form Delaware Limited Liability Companies, though it is often recommended the LLC have more than two members to benefit from tax exemptions. There is no limit on the number of members.
Take note, the US tax authority can categorize a Delaware LLC as a taxable branch of a foreign company if the members of the LLC are companies (non- resident, so it is best if the members of an Delaware offshore company in LLC form are persons rather that corporations
Similarly, if the LLC is treated like a Sole Proprietorship when owned by one member and the member is a non-resident alien, and the LLC derives its income outside of the US, the tax free benefit will be lost when treated like a Sole Proprietorship by the Internal Revenue Service (IRS)
Limited Liability companies are designed to protect the members (owners) from the debts and other obligations of the LLC. Such that the members risk in a Delaware offshore LLC limited to the investment in the LLC, personal effects property and assets are not subject to risk.
To be considered a Delaware offshore company, the company should be wholly owned by non-residents, though not necessary. The company cannot employ US residents as staff, nor can it have resident place of business in the United States.
Delaware Limited Liability Company formation beings with the certificate of formation which contains: the name of the company; the name and address of the registered agent; and the address of the company. The member may choose to include the company’s by-laws. The name of the company must have the phrase Limited Liability or the appropriate abbreviation (LLC) affixed to it. Delaware LLCs may also include the words; Association, Institution, Union, Company, Foundation in the name.
The Management of an offshore LLC is normally performed by the members. but a non member manager may be employed, reporting directly to the members. There is no requirement to hold member meetings or maintain records. Annual financial reports are required, which sets out the distribution of profits to US residents.
The names of the members of an offshore LLC are not part of any document filed with the state.

Delaware corporations are companies that are legally registered in the state of Delaware but can conduct business anywhere.
Roughly half of the companies listed on the S&P 500 are incorporated in Delaware because it is perceived as being business-friendly.
Delaware especially appeals to financial firms due to usury laws which give banks and credit card companies the freedom to charge high-interest rates on loans.
Usury laws are state-based legislation that establishes limits on the amount of interest that can be applied to loans and other forms of financing. This is a form of consumer protection that regulates how much interest businesses can charge their local customers. Delaware usury laws, by comparison, give lenders greater leeway to charge interest.
The state’s legislation also applies to operations and business conducted in other states. In other words, a company incorporated in Delaware can charge interest rates in accordance with Delaware usury law rather than local usury laws even when doing business with customers nationwide.
This particular benefit of incorporation in Delaware has prompted other states to adopt more business-friendly laws. For example, some states now allow locally incorporated businesses to charge interest rates on a par with out-of-state companies that do business within the state.
Delaware is currently the leading domicile for public companies, but this could conceivably change in the future; New Jersey was once the go-to state until modern U.S. corporation laws made it a less advantageous location.

Shares for a Delaware corporation