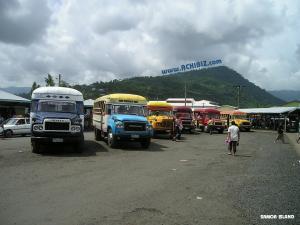 Samoa has few natural resources apart from its agricultural lands, surrounding waters, and pleasant scenery and climate; nearly half of the land area is covered by forests. Hydroelectric power provides most of the country’s energy needs; petroleum-fired thermal generators account for much of the remainder.
About two-fifths of Samoan roadways are paved, including many coastal highways and the major streets of Apia. International flights connect the islands with American Samoa, Fiji, New Zealand, Australia, and Japan. Regular shipping services link with ports abroad, including those in Hawaii and California to the northeast and Fiji, New Zealand, and Australia to the southwest. There are no railways.
Samoa has several thousand telephones in use, as well as international phone connections via undersea cable and satellite.

A cash economy developed following European contact, mainly based on agricultural exports ties up close kinship within the villages traditionally bound Samoans into a collectivist society. Tourism, services, and light manufacturing became increasingly important after 1950. Other major sources of capital now include remittances from Samoans living abroad (mainly in the United States and New Zealand), which account for as much as one-sixth of household income, and grants from the United States, the United Nations, the Commonwealth, and other foreign entities.
Agriculture accounts for two-fifths of Samoa’s gross domestic product (GDP) and nearly two-thirds of the workforce; however, production does not meet local demand, and large quantities of food are imported. Major crops include coconuts, taro, pineapples, mangoes, and other fruits.
Samoa has a persistently negative balance of trade. Major trading partners include New Zealand, China, Australia, the United States, and Japan. Food, industrial supplies, machinery, consumer goods, and petroleum products are the main imports. Coconut products, copra, cacao, and beer account for a majority of exports.

In 1962 Samoa promulgated its constitution as the first independent microstate in the Pacific region, and in 1970 it joined the Commonwealth. Samoa has a parliamentary government that blends Samoan and New Zealander traditions. The constitution originally provided for a constitutional monarchy.

The money supply is controlled and regulated by the Central Bank of Samoa, which was established in 1984. Samoa also has several commercial banks. Banking and finance account for only a tiny fraction of employment, although numerous companies have registered in Samoa since offshore banking services were initiated in 1988.

​ The Independent State of Samoa is not known to have major organized crime, fraud, or drug problems and due to the small size of the local economy and the banking sector, Samoa has not become a haven for money laundering or terrorism financing.
The mutual evaluation report (MER) of Samoa was adopted in July 2015.
This follow-up report analyses the progress of Samoa in addressing the technical compliance deficiencies identified in its MER. Re-ratings are given where sufficient progress has been made.
Samoa reported progress to address the technical compliance deficiencies identified in the MER. As a result of this progress, Samoa has been re-rated on Recommendations 3, 5 and 10.
Samoa is not blacklisted on any OECD, FATF or other international organizations list.

The Asia/Pacific Group on Money Laundering (APG) is an autonomous and collaborative international organisation founded in 1997 in Bangkok, Thailand consisting of 41 members and a number of international and regional observers. Some of the key international organisations who participate with, and support, the efforts of the APG in the region include the Financial Action Task Force (FATF), International Monetary Fund, World Bank, OECD, United Nations Office on Drugs and Crime, Asian Development Bank and the Egmont Group of Financial Intelligence Units. APG members and observers are committed to the effective implementation and enforcement of internationally accepted standards against money laundering and the financing of terrorism, in particular the Forty Recommendations of the FATF.

Samoa provides individuals and companies an outstanding jurisdiction in an idyllic environment to form an offshore company. The islands are located near the equator, giving tourists and residents a warm temperature climate year around.
Samoa’s International Finance Authority (SIFA) administers and regulates the offshore financial market, under the auspices of the Central Bank of Samoa. The government has passed a number of pieces of legislation that have continued to create a safe, credible and liberal offshore financial market, through the adoption of several different pieces of legislation, including:

All Samoan international offshore companies are free from all local taxation, which includes, but is not limited to taxes on profits, capital gains, transactions, and contracts. Samoa does not have a negative association in the world of offshore banking or offshore financial services though it has been pressured by the Australian government in recent times to reform its offshore industry which it has largely done in the last few years to appease global regulators.
The Samoan government entices international investors by modernizing its legislation and streamlining the company formation process, measures which have been largely successful.
A Samoan based offshore company has many advantages over a traditional onshore company. An offshore company is exempt from paying local taxes, submitting financial accounts, and any auditing requirements.
Samoan corporate legislation ensures confidentiality and minimal company formation requirements.

What activities can be carried out?

Following are the activities that can be legally carried out by an offshore company: