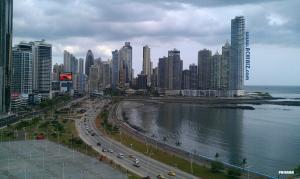 Guide For Offshore Corporate Services In The Republic of Panama

About The Republic of Panama

The country is best known for the Panama Canal, a man-made waterway, opened in 1914. Panama is a country on the isthmus linking Central and South America. The Panama Canal is one of the seven modern wonders of the world. The Panama Canal, a famous feat of human engineering, cuts through its centre, linking the Atlantic and Pacific oceans to create an essential shipping route. Embracing the isthmus and more than 1,600 islands off its Atlantic and Pacific coasts, the tropical nation is renowned as the site of the Panama Canal, which cuts through its midsection. In the capital, Panama City, modern skyscrapers, casinos and nightclubs contrast with colonial buildings in the Casco Viejo district and the rain-forest of Natural Metropolitan Park.

The Panama isthmus was first explored by Spanish conquistador Rodrigo de Bastidas in the year 1501. Panama became the Spanish Vice-royalty of New Andalucia in 1519. In 1821, Panama declared independence from Spain and joined the Republic of Gran Colombia, which became the Republic of New Grenada in 1831. The years between 1850 and 1900 were tumultuous for Panama: during this time there were 40 different administrations, 50 riots, five attempted secessions, and 13 interventions by the United States. Panama finally achieved complete independence on November 3, 1903, with assistance from the U.S. Hence, Panama celebrates not one, but two independence days. The first was from Spain in 1821. The second took place 82 years later, celebrating Panama’s independence from Colombia in 1903.

Panama is the only place in the world where you can watch the sun rise on the Pacific Ocean and set on the Atlantic Ocean from the same spot. At the narrowest point of the country, just 80 kilometre (50 miles) separates the two oceans. Panama City is the only capital city that has a rain forest within the city limits. In Panama, you can swim in the Atlantic Ocean and the Pacific Ocean in the same day.

Panama is bordered by Colombia and Costa Rica. The canal is owned and administered by the Republic of Panama, it is one of the two most-strategic artificial waterways in the world (the other is the Suez Canal in Egypt). Until 1999 the Panama Canal was controlled by the United States (USA).

Panama occupies an area of 74,177 sq. km, making it slightly larger than the Republic of Ireland or slightly smaller than the U.S. state of South Carolina.

Panama’s landscape is mostly mountainous, covered by rain-forest and jungle. The highest point in Panama is Volcan Baru, an active stratovolcano with an elevation of 3,475 m (11,460 feet) is located in West, close to the border with Costa Rica.

Panama is a constitutional democracy and a presidential representative republic with a multi-party system. The capital and largest city is Panama City and its official language is Spanish. Panama was the first Latin American country to adopt the U.S. currency as its own. While the U.S. Dollar is the official currency, the national currency is the Balboa.

Panama is considered one of the best places for retirees given its affordable cost of living, great healthcare, and use of the U.S. dollar.

Panama’s infrastructure is one of the best systems in Latin America. Infrastructure in Panama includes a network of roads and highways, the Panama Railroad, over 100 international and domestic airports and, of course, the Panama Canal.

Due to its geography, Panama plays a large role in trade and commerce. This has led to lots of investment being poured into the country’s infrastructure both from the government of Panama as well as from foreign governments and companies. Infrastructure in Panama plays an important role in connecting people throughout the Americas with its system of highways, trains, international airports and waterways.

Panama offers the most cost-effective, and by far and away the easiest residency program in the world, with its new ‘favoured nation visa’. Also popular is its long standing ‘pensionado’ visa for retirees.

Exchange risk is minimized since Panama’s currency is the US dollar. This makes it highly attractive to American citizens and provides the foundation for one of the most stable economies in Latin America.

The law of Panama is based on civil law with influences from Spanish legal tradition and Roman laws. For the first several years of its existence Panamanian law depended upon the legal code inherited from Colombia. Several features of Anglo-American law have also been accepted in Panama.

Panama’s monetary system is unique. With no need for a bank to issue and protect the paper currency, Panama did not have a central bank. The National Bank of Panama (Banco Nacional de Panama-BNP), a state-owned commercial bank, was responsible for non-monetary aspects of central banking.

There are zero exchange controls in Panama and there is no central bank. The U.S. dollar is used as its primary currency, that is, other than for very small transactions where the Panamanian Balboa may be used (which is at parity with the dollar).

Panama’s circulating currency is the US Dollar, and Panama has no currency exchange controls or currency restrictions so funds can flow in and out of the country freely.

​Panama’s “New Banking Law,” states that banks and other supervised entities are obliged to establish policies, procedures, and controls for the prevention of money laundering, terrorist financing, and related crimes.

Panama is on the FATF List of Countries that have been identified as having strategic AML deficiencies.

Since June 2019, when Panama made a high-level political commitment to work with the FATF and GAFILAT to strengthen the effectiveness of its AML/CFT regime, Panama has taken some steps towards improving its AML/CFT regime, including by drafting sectoral risk assessments for the corporate and DNFBP sectors and free trade zones.

The latest follow-up to the Mutual Evaluation Report relating to the implementation of anti-money laundering and counter-terrorist financing standards in Panama was undertaken in 2019. According to that Evaluation, Panama was deemed Compliant for 15 and Largely Compliant for 23 of the FATF 40 Recommendations. It was also deemed Highly Effective for 0 and Substantially Effective for 2 with regard to the 11 areas of Effectiveness of its AML/CFT Regime.

On 13 February 2019, the EU Commission adopted a new list of 23 third countries that had been identified as having strategic deficiencies in their anti-money laundering and counter-terrorist financing frameworks as defined under the Fourth and Fifth Anti-Money Laundering Directives. Panama has been included on this list. This list currently includes all countries currently on the FATF AML deficiency lists together with 11 additional jurisdictions. Panama is on the EU list of non-cooperative jurisdictions for tax purposes

It is noted that to date the EU Member States have declined to adopt this list. However, as this country has been identified as having AML deficiencies by the EU Commission, FATF has rated it accordingly.

Panama has demonstrated an increased commitment to fiscal transparency by becoming a signatory to the OECD bilateral Common Reporting Standards in January 2018, and through its participation in the Convention on Mutual Administrative Assistance for Tax Matters.

There are no international sanctions currently in force against this country.

Panama offers the most favourable and most flexible incorporation laws available in the world. Private Interest Foundations are also available and are one of the most widely used estate planning structures in the world today.

It is not necessary for interested parties to be present in Panama for the purpose of establishing a corporation. Corporations conducting business outside of Panama do not require a commercial license for offshore business activities.

Non-resident Panamanian International Business Corporations (IBC’s) and Private Interest Foundations do not pay tax on any of their income (as indicated below), nor do they have any reporting requirements to the Panamanian government.

Panama’s territory-based tax system does not levy an income tax as long as your income is earned outside the Republic. Panama’s corporate law is founded on legislation from Delaware and New York (Corporation Law No. 32 of the 1927 Commercial Code, Decree Law 5 of 1997 and Executive Decree 296 of 1997) but written in the form of Spanish Civil Law.

Panama leads the world as the top yacht and ship registration jurisdiction. Panama offers the most favourable and most flexible incorporation laws available in the world.

Panama has a supportive legislative and banking environment making incorporation procedures both easy and flexible for many different business activities. An offshore company can be made for any legal purpose and for any legal activity, including but not limited to: